Engulfed in the inevitable maelstrom hype that follows finishing top of the BBC's Sound of 2015 List, there's a great deal of intrigue as to whether or not Years & Years can capitalise on what is set to be their breakthrough year. 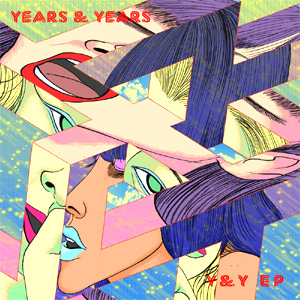 There's no question that the London trio know their way around a powerful pop hook. Anyone who heard breakthrough single 'Desire', and that's basically everybody, can attest to that. Across 'Y&Y EP', the band's most substantial release to date, this keen ear for a hook only becomes more apparent. With a sound unashamedly soaked in House and R&B influences, it's a vibrant EP bursting at the seams with irrepressible melody.

One of the most impressive things about Years & Years is their ability to create songs that are at the same time both seemingly simplistic yet incredibly compelling. Why is 'Desire' so effective? Is it because it's a shining bastion of light for unbridled experimentation? A masterclass of songwriting layered in bewildering complexity? Well, despite the fact that Years & Years have cited Radiohead as one of their influences, no. It's because it boasts two killer hooks and squeezes them both into one song to create something which straddles the line between accessibility and artistic credibility as if the trio have been doing it all their lives.

Latest single 'King' is all pounding synths and euphoric choruses, and all the better for it. Much like the music it floats over, Olly Alexander's lyrics vocal keep things simple and accessible, but never come across as glib or insincere. Lyrics like, "I caught you watching me under the light / Can I realign / They say it's easy to leave you behind / I don't want to try" might not suggest that Alexander's future lies in poetry, but when you're writing feel-good floorfillers, that's hardly the point.

'Take Shelter' rivals anything that 'Desire' or 'King' has to offer, serving up a further slice of sweet pop euphoria, surely primed for the summer months. By contrast to the rest of the EP, however, closing track 'Memo' slows thing down and shows that Years & Years have another dimension. As with all the songs on the record, the subject matter is desire and longing, but over a pared down piano, Alexander's vocal is more exposed and vulnerable. It's a move that works well, still benefiting from the slick production present across the record, but showcasing the versatility of Alexander's voice. If Years & Years can replicate the quality of 'Y&Y EP' across their debut album, expected to drop in mid-summer, then 2015 should continue to be a monumental year for the band.