By Jordan Dowling in Music Reviews on 22 April 2013

A Little Orchestra are a dectet who have their fingers in many pies, having performed with or collaborated with acts such as The Pipettes & The Loves amongst others, and the Josefina EP sees them call in a few favours, with vocal contributions from Rachel of Model Village, ex-Hefner front-man Darren Hayman, Ballboy vocalist Gordon McIntyre & Simon Love of the aforementioned The Loves. However, it is on the moments that the band look inwards that they really shine. 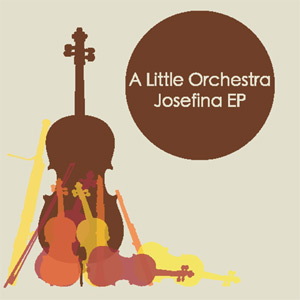 The Josefina EP is opened by its title track; a rolling, strolling indie-pop gem that is cinematic but in the way of flickering projections of home-made escapades and not wide-screen productions. The syncopation between ebbing strings and sighed female vocals is instantly reminiscent of Camera Obscura but here the atmosphere is more playful than bitter-sweet; there is the same air of longing but it breezes through landscapes that are much more serene.

The five-track EP's closer is its highlight; an instrumental ditty that in just under two minutes evokes the wizardry of the soundtrack work of Yann Tiersen and Ryuichi Sakamoto at their most light-hearted in a manner not too dissimilar to past partners-in-crime Haiku Salot, but despite this similarity it is here, possibly only here, where they truly stand alone.