Adam Levine Not Gay But Says Brother Is 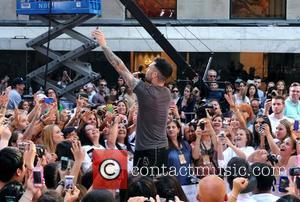 Adam Levine, the lead singer of American pop band Maroon 5, claims he "cannot hide" his straightness, despite rumours circulating that he is homosexual. The singer appears on the cover of Out Magazine's September issue and speaks candidly about his sexuality in the accompanying interview.
The 32-year-old claims he wouldn't be doing his job well if his sexuality wasn't brought into question - citing David Bowie and Mick Jagger as examples of straight rockstars accused of being gay. Levine added, "There's no way to hide my straightness.but if people didn't think there was a small chance I was gay, then I wouldn't be doing my job very well.I wouldn't be the front man of a band if that question hadn't come up at some point" The singer, who is now dating Victoria's Secret model Anne Vyalitsyna, says he helped his brother when he came out as gay. Adam explained, "A lot of people don't want their kid to be gay and will fight it at all costs. But I've got news for you - it's a losing f*cking battle. The more you fight it, the more f*cked-up your kid's gonna be. You've just got to embrace it from the beginning". In previous years, the singer has been linked to the likes of Paris Hilton and Kirsten Dunst.
Adam Levine currently stars in the video for 'Moves Like Jagger' - his band's latest single featuring CHRISTINA AGUILERA.