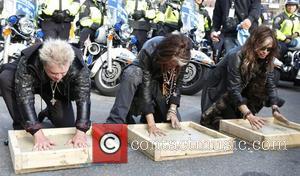 OK, so the majority of the US public have just one race on their minds today and that’s the US Presidential race. But once that’s been decided in a few hours, all thoughts will surely be turning to the all-important albums chart race… surely? Can any of this week’s releases threaten Taylor Swift’s position at the top or will she get a second term at number one?

Aerosmith have returned, after an 11-year hiatus from writing any new material. Time appears to have stood still on Aerosmith-land in those eleven years and Music From Another Dimension is pretty much as you would expect an Aerosmith album to sound. Of course, Steven Tyler’s presence on American Idol has brought the attention of Aerosmith back to a new generation of fans, so much of this material may well even sound fresh to them.

Read our review of Music From Another Dimension

R.E.D. (an acronym for Realising Every Dream) is Ne-Yo’s debut album with the legendary Motown Records, He’ll be hoping to erase all memory of the disappointment of his 2010 album Libra Scale. This time around, Ne-Yo’s reunited with old pals StarGate on production duties and he’s also teamed up with country star Carrie Underwood, on ‘She Is,’ as well as enlisting the help of Sia Furler on ‘Let Me Love You.’ All the credentials are there to make this one a R.E.D. hot success for the 30 year-old R&B star.

The latest Bond movie, Skyfall is released in the US this week, preceded by just a few days by the original soundtrack score. The theme tune, sung by Adele, is not present on the album, but there is still plenty contained herein to keep Bond fanatics and soundtrack enthusiasts happy. Skyfall is scored by Thomas Newman, a longtime collaborator of the movie’s director Sam Mendes. Probably not a contender for the top of the charts but an essential purchase for Bond fans.

Here's one you'll all recognise:

Third Day release their 11th studio album, Miracle, today and with their last three longplayers reaching the Top 10 of the Billboard chart, they are likely to repeat the success here. The Christian rockers already have four Grammy awards under their belt and they’re perennial favourites in the Christian rock world; they would have to do something pretty drastic to upset their reign as one of America’s most righteous rockers.

Watch the video for Third Day's 'Hit Me Like A Bomb'