Alex Pettyfer is set to star as Kristen Stewart's lover in edgy action movie 'Cali', which will see the pair play a pair of lovebirds who ride off into the sunset with a bundle of cash after selling a fake film, but the brunette beauty is forced to return at a later date to save her sister's life.

Alex Pettyfer is set to star as Kristen Stewart's lover in 'Cali'.

The 'Magic Mike' actor - who has previously dated Emma Roberts and Dianna Agron - is in final negotiations to portray the 'Twilight' star's love interest in the edgy action movie, which is directed by Nick Cassavetes.

The 22-year-old hunk looks set to play Chris, The Lover of Mya (Kristen), in the motion picture, which sees the San Fernando Valley pair ride off into the sunset with a bundle of cash after selling a fake snuff film, but Mya is forced to ''return from the dead'' to save her sister from a group of unsavoury characters, Variety reports.

Zev Foreman and Craig J. Flores are in line to produce the movie, with Brian Levy, Nicolas Chartier and Kristen set to executive produce on the film, which will be the brunette beauty's first producing credit.

Production on 'Cali' is due to start later this summer and the motion picture is expected to be released next year.

Alex previously starred opposite Dianna in 2011 sci-fi film 'I Am Number Four' and his latest role saw him portray a stripper, Adam, in 'Magic Mike', which sees Channing Tatum's titular character teach the younger performer how to make easy money, pick up women and party. 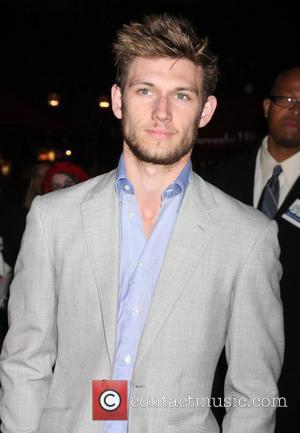