Wiz Khalifa's Estranged Wife Amber Rose Has Been Caught Up In A Los Angeles Prostitution Ring After Sex Bosses Used Old Footage Of The Model/singer To Net Young Women. 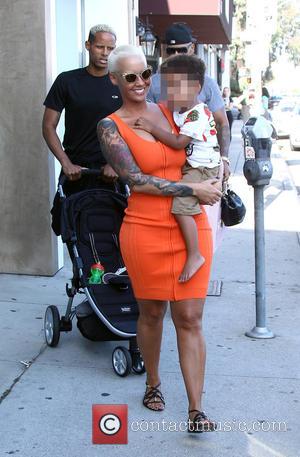 Picture: Amber Rose and Sebastian Taylor Thomaz - Amber Rose carries her son Sebastian in her arms as she goes on a shopping spree - Los...

Los Angeles Police Department officials claim aspiring models were recruited for "intimate" dates with rich men under the guise Rose would be part of the selection process.

Police were alerted to the scam on Monday (17Aug15) when one young woman recounted her experience to detectives, revealing she was recruited via Instagram and hooked up for a video chat with Rose.

But when the grainy image of the bald model suddenly dropped, the unnamed woman became suspicious.

Detectives have since discovered the video was simply old footage from Rose's Ustream account.

Following the 'call' from Amber, the model received a text message asking if she'd like to become intimate with rich men who could help jumpstart her career, according to PerezHilton.com.

Rose, who police have determined is not linked to the prostitution ring in any way, has yet to comment on the story.