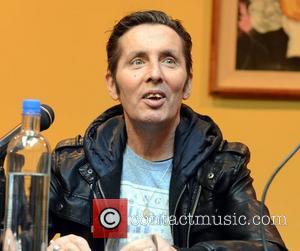 Picture: Christy Dignam - Aslan hold a press conference in Gresham Hotel to announce their return to live shows for the first time since lead singer...

Aslan singer Christy Dignam has been diagnosed with cancer.

The Irish rocker, 52, pulled out of a gig earlier this month (01Mar13) and was admitted to hospital in Blanchardstown, Dublin, with a suspected chest infection.

Dignam was transferred to the Mater Hospital in Belfast on Tuesday (12Mar13) where, after undergoing tests, he received the devastating news.

Bandmate Billy MCGuinness tells the Irish Sun, "It's just shocking. We heard he took a bad turn and was moved to the Mater but we don't know how advanced it is. We were gearing up for our gig in the Olympia on St Patrick's Day and heading to Sweden later this month for the Ireland match. He's had all the tests so we will just have to wait and see."

Dignam's wife Katherine and daughter Kiera issued the following statement on the band's official Facebook.com page, "Christy was admitted to hospital with a suspected chest infection, this progressed into pneumonia. After numerous tests he was diagnosed with cancer. He is to undergo treatment immediately and will be unable to perform until doctors advise it is safe to do so.

"We would like to thank everyone for their well wishes and messages,we are trying to deal with this news and help him through his illness and hope fans will continue to be as supportive as they have always been. We would like to ask for some privacy at this time. Thank you Kathryn and Kiera Dignam and all the members and crew of Aslan."

Aslan - Made In Dublin