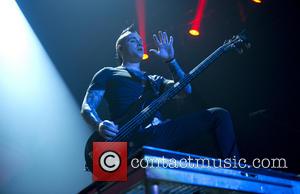 The band's stars Synyster Gates and Zacky Vengeance were jointly awarded the Dimebag Darrell Best Guitarist prize, while Arin Illejay was named Best Drummer. The group was also awarded the title for Most Devoted Fans.

Five Finger Death Punch were two-time winners, scoring the Paul Gray Best Bassist Award for Chris Kael and Song of the Year for Lift Me Up.

It was also a big night for Ozzy Osbourne and his Black Sabbath bandmates, who celebrated their comeback with the Album of the Year honour for 13.

Joan Jett made awards history as the first female recipient of the Golden God Award and Axl Rose was feted with the Ronnie James Dio Lifetime Achievement Award.

Rose also treated guests to a special reunion performance with his former Guns N' Roses pal Duff MCKagan, who recently stepped in to the line-up to temporarily replace bassist Tommy Stinson, while another highlight of the heavy metal awards show came from Slayer, who delivered a surprise three-song set to open the ceremony. They also debuted new track Implode, their first new material since the death of guitarist Jeff Hanneman last year (13).