Review of Trophy Single by Bat For Lashes 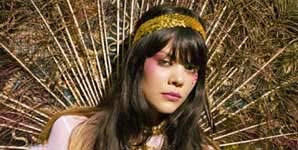 From debut album "Fur And Gold", "Trophy" features the talents of Josh T. Pearson. With an aching bass line, the track has a dark atmosphere that is only added to by drawn out strings. Khan's voice is commanding and emotive, blending well with the deep male counterpart. The result may not be catchy, but it certainly is captivating and hypnotic.