Blake Likely is such a big fan of Taylor Swift, she wishes the singer was her wife. 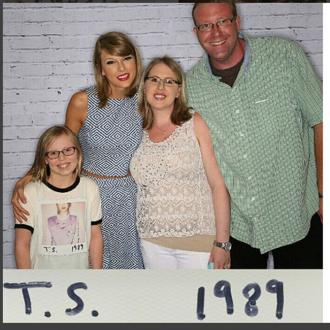 The former 'Gossip Girl' star - who has nine-month-old daughter James with husband Ryan Reynolds - has dismissed claims she took a swipe at the 'Blank Space' hitmaker and her ''squad'' with a picture of herself and her co-stars in the new L'Oreal Color Riche lipstick short film and insisted she is such a big fan of the 25-year-old singer, she wants to be her wife.

Sharing a picture of Taylor with some members of her family, Blake wrote: ''Umm whoever thought I was throwin shade clearly doesn't know I have a 'Taylor Swift Please Be My Wife Voo Doo Doll.'

''Look how rad she is here making my niece Heather feel like a rock star. Love my Canadian family almost as much as I love Taylor Lively. I mean Swift. Ok, FIIINE we can hyphenate our last names. Xo Blake Swift-Lively 4eva. (sic)''

She wrote: ''...soooo, turns out this WASN'T a video shoot for John Legend's cover of Bad Blood @lorealparisofficial blew it out for this one. My #pinkobsession is exposed now Ok your turn. I won't tell! #AlsoTurnsOutJohnLegendIsntCoveringBadBlood Time to start a petition! (sic)''