Channing Tatum has revealed his wife Jenna Dewan-Tatum didn't watch any violent films while she was pregnant with their daughter Everly because she only wanted the unborn baby to be surrounded by ''good vibes''. 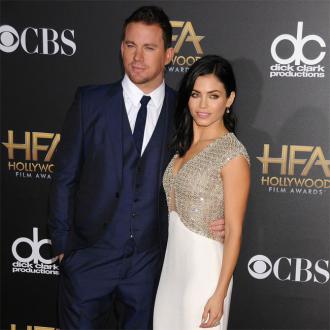 Channing Tatum's wife Jenna Dewan-Tatum wouldn't watch any violent films while she was pregnant because she wanted their baby to only receive ''good vibes''.

The couple wanted their now 18-month-old daughter Everly to have the best start in life and so Jenna avoided any movies with murder or fighting in them and only surrounded herself with calming influences while she was in the womb.

In an interview on UK TV show 'Lorraine', Channing said: ''When she was pregnant and we didn't even watch violent movies, we just wanted her (Everly) to have good energy and vibes when she came into the world.''

When Jenna was expecting Everly Channing was shooting dark drama 'Foxcatcher', which is based on the true story of American multimillionaire John Eleuthère du Pont's and the Schultz brothers attempts to train wrestlers for the US Olympic team.

The 34-year-old actor got so into character when he was portraying gold medallist grappler Mark Schultz that Jenna cut short a visit to Pennsylvania where the movie was being made because she didn't want Channing's negative energy around their unborn child.

Recalling the visit, Jenna, 34, said: ''I was pregnant, so I came already hormonal. It was so interesting because he was so in character, channelling this sort of intense dark character that I was like - and it was winter - I'm going to go back to California!''

Channing also stars with Steve Carrell and Mark Ruffalo in the Oscar-tipped film.