Coco Rocha has become the new face of Dennis Basso after the model met the designer at the recent Met Gala.

Coco Rocha has become the new face of Dennis Basso.

The stunning model will front the designer's fall/winter collection after the pair met at the QVC table at the Met Gala last month.

The 23-year-old beauty - whom Basso says he ''fell in love with'' after she wore a pantsuit bought at the Dame Elizabeth Taylor auction - found herself modelling a $250,000 mink in 100-degree heat on the Essex Steam Train in Connecticut this week.

According to the New York Post newspaper, Basso remarked Coco was ''the only person on set not sweating''.

Although the pair met at the Met Gala, Coco recently revealed she found attending the New York event more ''daunting'' than any other bash.

She said: ''Of all the events, I have to say the Met Gala red carpet is most daunting. You have cameras on both sides of you all the way up a red-carpeted staircase. If you turn to one side, the other side boos. You really can't win.

''Once people learn your name they all begin screaming for you.

''I've made the mistake in years gone by of showing up a little late to the event, right when the BeyoncÃ©s and J. Los of the world are having their moment - then you have photographers screaming for you to get out of the way! So this year I came nice and early.'' 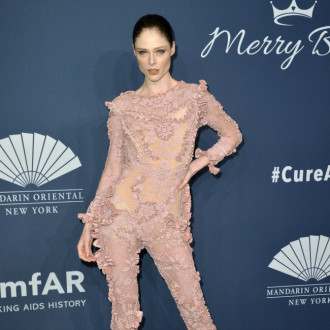