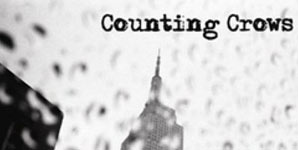 There is a trick at the core of this album - it's essentially two albums. The Saturday Night rock bit is produced by Gil Norton (Foo Fighters, Pixies) while the Sunday morning acoustic bit is produced by Brian Deck (Modest Mouse, Josh Ritter). It's an old idea, and at first makes the album seem a touch confusing - following 6 years after its predecessor, one might expect a little more evolution to have taken place.

In places, the album sounds like a computerised remix of previous discs, from when they were good, and from 2002, when they peddled whatever was lying around the studio when they went in. The songs here aren't strong. At their best, they come close to the sound of August and Everything After, or Recovering The Satellites - openers 1492 and Hanging Tree are a great start. At worst, as on On A Tuesday In Amsterdam Long Ago, it is almost unspeakably woeful. Adam Duritz can often fall well over the line into whiny love soldier, and the steely edged rock helps hide that tendency. Unfortunately, those songs that sound like they're being made up on the spot - On Almost Any Sunday Morning - will test the reserve of all but the hardiest fan. Good, but nowhere near the Counting Crows that made it big in the first place.