Cynthia Nixon has revealed her wife Christine Marinoni feared she would be bald for their wedding because she had to shave her head for her role in stage play 'Wit'. 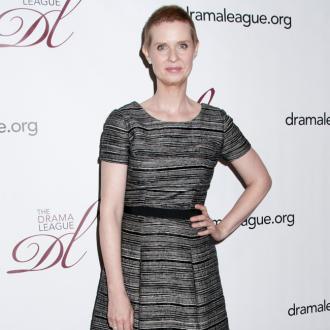 Cynthia Nixon's wife was worried about her being bald on their wedding day.

The former 'Sex and the City' actress shaved her head for her role as a cancer sufferer in the stage play 'Wit' before her May nuptials to long-term partner Christine Marinoni and Cynthia revealed Christine was worried her baldness would overshadow their big day.

In an interview with the US edition of Elle magazine, she said: ''I'd shaved my head to play a professor with ovarian cancer in 'Wit' and my hair had just started to grow back. My wife was worried that my being bald was all anybody would want to talk about.

''My mother kept making suggestions like, 'Look at this cunning beaded cap Whitney Houston wore to her wedding, isn't it great?'''

While Cynthia went through her options of headwear, Herve Pierre, the creative director at Carolina Herrera, who designed her wedding gown, came up with a solution.

She said: ''I considered wearing a veil but luckily Herve Pierre came up with something better, just a little bit of silver and white ribbon wrapped twice around my head, to which we affixed some small Fred Leighton diamond love birds. It made me feel like Tatiana from 'A Midsummer Night's Dream' and you want to have that kind of magical feel on your wedding day.''