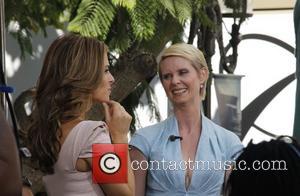 The Sex and the City star shaved her head in January (12) to play a terminal cancer patient in Broadway play Wit, and the show ended just two months before her nuptials to fiancee Christine Marinoni in May (12).

In a bid to look her best on her big day, the actress began taking Viviscal tablets to stimulate the growth process - and Nixon insists it worked like a charm.

During an appearance on U.S. morning show Live! With Kelly and Michael on Monday (15Oc12), she said, "The play closed I think in March (12) and then I got married at the end of May (12), so, bald bride, probably wouldn't have been my first choice.

"But some people recommended this thing called Viviscal, so I took all these vitamins. It really worked! And so, by the time I got married, I was like, 'Wow! I have all this hair!'"

The 46 year old also recently revealed she commissioned her wedding dress designer to create a special headdress for the ceremony in case her at-home treatment didn't work out.