Like an ancient Roman version of 2012, this disaster epic is a pure guilty pleasure, sparking plenty of laughter along with the massive effects-based carnage. It also helps that the screen is packed with muscle men in skimpy skirts. The actors dive in with gusto, adding plenty of personality to the ridiculous dialogue, while director Paul W.S. Anderson shamelessly ramps up the action mayhem.

It begins in AD 79 Britain, where Roman Senator Corvus (Kiefer Sutherland) is on the rampage, slaughtering the entire Celtic community of young Milo (Kit Harington), who is taken to Londinium to become a gladiator. When he rises to fame, he's transferred to Pompeii, where he immediately catches the eye of young noblewoman Cassia (Emily Browning), much to the scowly disapproval of her politically active parents (Carrie-Anne Moss and Jared Harris). An outsider among the local slaves, Milo is befriended by tough guy fellow gladiator Atticus (Adewale Akinnuoye-Agbaje). And when Corvus comes to town to claim Cassia as his bride, Milo decides to take a dangerous stand for both revenge and the girl. Meanwhile, Mount Vesuvius is rumbling, getting ready to unleash plenty of movie-style havoc.

It's impossible to watch this without thinking of the cheesy, similarly styled TV series Rome or Spartacus, with their corny melodramas, excessive violence and bare flesh. Even though this is on a much bigger scale with seriously enormous 3D special effects, it's just as cheesy. And equally entertaining as well. Harington is terrific as the hunky hero, building much stronger chemistry with the honourable Akinnuoye-Agbaje than the distressed Browning. And seasoned veterans like Harris, Moss and Sutherland clearly have a great time chomping madly on the scenery as Pompeii burns. 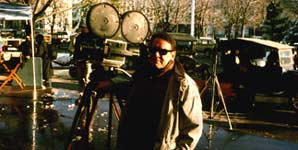 The name of Don Carmody may not be a name that is familiar to most filmgoers; however, it is highly likely that you have seen at least one of his films. From Oscar winning hits like Chicago to computer game adaptations such as Silent Hill and Resident Evil, Carmody has overseen production on well over seventy films.

Although he is not as well known as other Hollywood moguls like Joel Silver and Jerry Bruckheimer, you won't hear Carmody complain: "It's the name of the game. A producer generally subverts his ego to those of the creative elements. He goes along to get along."

As one of the hardest working producers in the business he shows no sign of slowing down. Living in Montreal, Carmody takes immense pride in making big budget Hollywood features in his home country. When asked what his greatest professional achievements were he simply replied: "Winning an Oscar for Chicago and bringing world class films to Canada."

By Keith Breese
Very Good
I have not played the video game upon which this film is based, and I assume that that's not a prerequisite. If the game is anywhere as creepy and odd as this movie, perhaps I should. The plot concerns a typical family with atypical problems, their young daughter Sharon (played by the J-horror-haired Jodelle Ferland) is a sleepwalker and it seems as though her somnambulistic journeys take her further and further from the safety of home (in the opening minutes of the movie we see her standing atop a particularly dangerous cliff face). Her parents Rose (Radha Mitchell) and the dour Christopher (Sean Bean) are at odds over what to do. Christopher opts for medication, while Rose decides to follow Sharon's lead. When she's dreaming, Sharon mentions a town called Silent Hill. Rose decides she'd better bring Sharon to the town and find out just what all the fuss is about. Turns out, Silent Hill is off limits - the place is a ghost town after a disastrous fire. And the fire still burns under its decaying crust.