Emilia upset refuses to Google herself because she thinks it would give her an eating disorder. 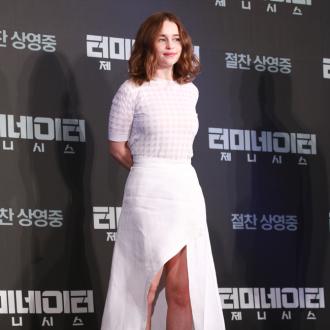 Emilia Clarke won't Google herself because of online comments which called her ''fat''.

The 28-year-old actress admits she was put off from searching for her own name on the Internet after reading articles about her nude scenes on 'Game of Thrones' during the first series of the fantasy drama.

She recalled: ''There were a number of very public discussions about the size of my derriere.

''One article said it was refreshing to have such a 'healthy-sized' bottom on television. You hear that and immediately hear, 'I'm fat.'

''So I just wanted to save myself from any future eating disorders that may emerge.

However, Emilia recently joined Instagram but has been horrified by the graphic comments left on her pictures.

She told GQ magazine: ''You can't help but see the comments. One was just a list of all the sexual acts he wanted to do to me. In text speak.''

The actress - who played Sarah Connor in 'Terminator Genisys' - is currently on crutches and though she has invented a number of reasons why, such as an injury from jumping out of a helicopter or having ''really rowdy sex'', she admits it was much less exciting.

She explained: ''I run, and it's a stress fracture. I was just not taking care of myself.