North Korean Leader Kim Jong-un's Elder Brother, Who Has Not Been Seen In Public For More Than Three Years, Was Spotted Out And About In London This Week (Beg18may15) - Attending An Eric Clapton Concert. 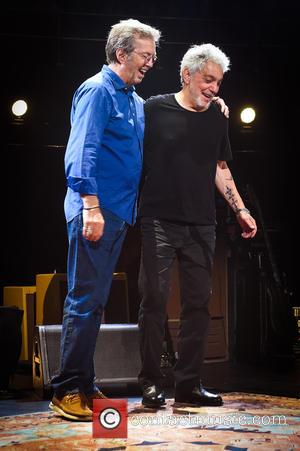 Kim Jong-chul is thought to have been hiding from the public gaze since he was taken out of the leadership succession when Jong-un rose to power in December, 2011.

However, in a bizarre development, he was spotted cheering, clapping, and singing along at a show by the Wonderful Tonight hitmaker at London's Royal Albert Hall on Wednesday (20May15).

Cameras also caught footage of Jong-chul back at the venue for another Clapton gig on Thursday (21May15).

A BBC journalist who was at Thursday's concert says, "He was just like any other fan, but there were officials all around him. They were obviously not Clapton fans, and looked really out of place. But he was having a great time, singing along to all the words."

Jong-chul has made no secret of his love for Clapton - the last recorded sighting of him was at a show by the British rocker in Singapore in September, 2011.