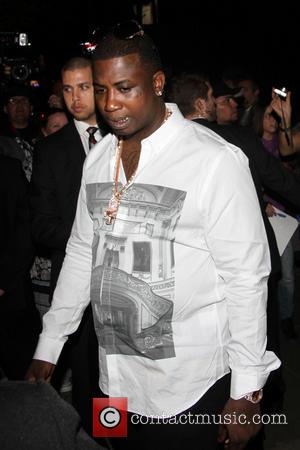 Gucci Mane's rap affiliate Peewee Longway had to skip a concert in Montgomery, Alabama on Sunday (31Aug14) after he was arrested on suspicion of drug possession.

Longway, who is signed to Mane's 1017 Brick Squad Records, was taken into custody by police shortly before he was due onstage at Club Luxe and was subsequently charged with illegal possession of a controlled substance and first degree possession of marijuana.

Gucci Mane, a convicted felon, is facing his own legal troubles - he was recently sentenced to 39 months in prison after pleading guilty to federal firearms charges relating to two separate incidents last year (13).

Gucci Mane and Keyshia Ka'oir are expecting their first child

Gucci Mane getting own brand at Gucci?

Gucci Mane Does Not Have Early Prison Release Date Set

Gucci Mane Planning Album With Diplo From Behind Bars

Gucci Mane Opens Up About Prison Life In Letter To Fans

Gucci Mane Sentenced To Over Three Years In Jail