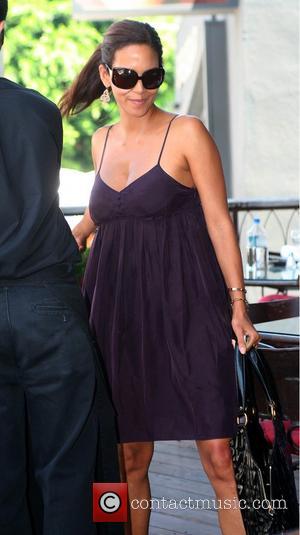 Picture: Halle Berry leaving a restaurant to run some errands. She stops by a shop to buy some groceries Los Angeles, California - 22.08.07

The MONSTER'S BALL beauty, 37, has incurred a vast array of injuries while making movies and going about her daily life, encountering two car accidents, one broken arm and one eye wound.

While playing JINX in James Bond film Die Another Day with Pierce Brosnan last year (02), Berry was shooting a fight scene when debris from a smoke grenade lodged in her left eye. She was rushed to hospital to remove the fragment. Later, during a steamy love scene with Brosnan, Berry choked on a piece of fruit.

Brosnan recalls, "She was gagging and waving her arms. I banged her back, and put my arms around her to do the Heimlich, and somehow she expelled the fruit."

In May (03), Berry broke her right arm while filming a violent scene in GOTHIKA, delaying shooting while she recovered.

Three years ago, the actress suffered a deep gash to her forehead requiring 22 stitches when she crashed her car into another vehicle. And in 1998, she was sued by a motorist who claimed she'd rammed her car into his vehicle in Hollywood. Luckily, she escaped injury.

IN TOUCH magazine's full top 10 of accident-prone celebrities is as follows: