Stations Of The Cross Review

A bracingly audacious approach to storytelling sets this film apart from the crowd, as it recounts an unnerving series of events in an inventive way. German filmmaker Dietrich Bruggemann tells this bold story in just 14 long takes, each of them titled as one of the Stations of the Cross (Jesus Is Condemned to Death, Jesus Carries His Cross, and so on). But this isn't a literal retelling of the crucifixion, it's using Catholicism to explore how religious, educational and political ideologies can warp a young person's mind. And how tricky it is to know what's really going on. At the centre is 14-year-old Maria (Lea van Acken), studying for her confirmation with Father Weber (Florian Stetter). As part of a fundamentalist Catholic sect, Weber urges the teens to reject "immoral" advertising and "demonic" rock music. And Maria's devout mother (Franziska Weisz) takes this very seriously indeed, loosing her cool whenever she thinks her daughter might be going off these very narrow rails. But Maria is even more pious, ashamed that her interest in a boy (Moritz Knapp) has made her lie to her mother. Then she decides that if she sacrifices everything in her life she may bring about a miracle for her baby brother, who at 4 still hasn't spoken his first word. While her strict discipline makes her physically frail, she feels like she's getting closer to God.

With the intense filming style (the camera only moves a few times), Bruggemann never gives the audience any relief. Scenes are packed with all kinds of moods, including humour, tentative longing, curiosity and harsh disapproval, but each moment is so carefully filmed that we can't take our eyes off Maria. Her interaction with everyone around her is staggeringly complicated, and we begin to understand how she sees what she's doing as her path to sainthood. Only a few people provide a voice of reason in this closed-in community, including a doctor, teachers and Maria's au-pair (Lucie Aron). But it's Maria's mother who dominates everything, and Weisz delivers a remarkably twisty performance as a woman who wants to have fun with her family but can't resist harshly controlling everything. 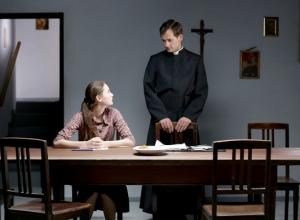 Stations of the Cross Movie Review

A bracingly audacious approach to storytelling sets this film apart from the crowd, as it...