Hozier Has Reportedly Filed A Defamation Lawsuit Against Pianist Chilly Gonzales Over Allegations The Irish Singer/songwriter Lifted The Music For Take Me To Church From His Feist Collaboration How Come You Never Go There. 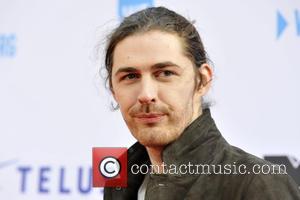 The rocker scored a huge breakout hit with the Grammy Award-nominated Take Me to Church, which he originally released in 2013, but Gonzales recently stirred controversy by claiming Hozier's tune is identical to the track he produced for fellow Canadian Feist in 2011.

He demonstrated his point in an episode of his Pop Music Masterclass video series for German radio station 1Live late last month (Sep15), when he compared the two songs musically.

He said, "I'm being told by the research staff that Feist's track came out well over a year before Hozier's. Doesn't look so good does it? Take Me To Church? Maybe Feist should take him to court."

Hozier has since taken issue with Gonzales' comments and has lodged papers in Dublin's High Court under his real name, Andrew Hozier-Byrne, according to Britain's The Sunday Times.

Gonzales' Masterclass video has since been removed from video streaming site YouTube.com.