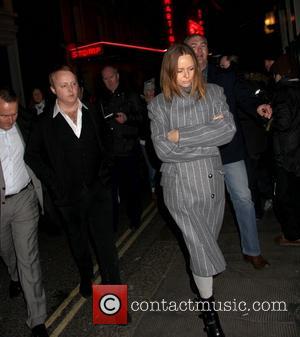 James McCartney was surrounded by rock royalty at a small gig in London on Wednesday (27Mar13) when his famous father Paul and Ronnie Wood joined him on stage.

The Beatles legend's son performed a preview show at the Ambassadors Theatre ahead of his upcoming U.S. tour, and had called in a favour from Rolling Stones star Wood by asking him to play guitar during the set.

However, James' dad couldn't resist getting involved at the gig, and surprised his son by jumping onstage to play the piano during one of his songs.

The Hey Jude hitmaker then rejoined the audience - which included his daughters, Stella and Mary, and his wife Nancy - while James finished the sold-out show.

James Mccartney: 'My Dad's My Hero'

James Mccartney To Form The Beatles 2.0 With Sean Lennon?

The Sons Of The Beatles To Form Band?