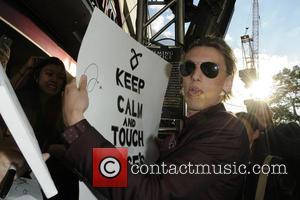 Actor Jamie Campbell Bower's movie career is leaving its mark on the star - he has a new tattoo after wrapping each film.

The Twilight star has several inkings, including designs on his chest and arms, and reveals he heads to his tattooist after the last take on each of his projects.

He tells Britain's Daily Mail, "I always get a tattoo whenever I finish a film. I wanted a couple of roses done. I decided to go and have a look at the parlour I like, but they were closed for the day, which was such a shame - I'll have to fit in a visit before I go back to L.A."