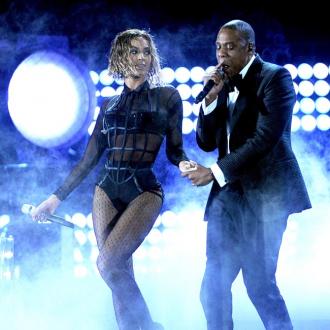 Jay Z thanked God for his ''beautiful'' wife Beyonce at the Grammy Awards.

The 44-year-old rapper - who opened last night's (26.01.14) ceremony with a performance of 'Drunk in Love' with his spouse - dedicated his win for Best/Rap Sung Collaboration for 'Holy Grail' featuring Justin Timberlake to the singer and their two-year-old daughter Blue Ivy.

He said: ''I want to thank God, I mean, a little bit for this award, but also all the universe for conspiring and for putting that beautiful light of a young lady in my life.''

Holding his golden gramophone statue aloft, he added: ''I want to tell Blue, 'Look, Daddy got a gold sippy cup for you!'''

When he first took to the stage, Jay jokingly threw mock punches at Jamie Foxx, who was presenting the trophy, after the singer-and-actor spent much of his opening speech praising Beyonce for her sexy performance with her husband earlier in the evening.

Jamie had said he had to apologise to the rapper backstage because ''Blue Ivy's mom is hot.''

During their opening performance at the Staples Center in Los Angeles, Beyonce had donned just a sheer bodysuit, glittering bra, skimpy thong, and crystal-studded fishnets teemed with wet-look hair for the duet.

She began the track on a chair with her back to the audience before her spouse appeared in a cloud of smoke.

The 32-year-old beauty got up from the chair to dance seductively with her spouse, running her hands along his butt and legs before they shared a kiss mid-song.