The Look Of Silence Trailer

Sometimes, you simply have to live with the past. You don't have to like it, but you have to accept it in order to not repeat it. This is the lesson that a young man is forced to realise, much to his grief. Growing up in Indonesia in the fallout of a mass genocide, he cannot abide by the idea of living so close to the people who killed his brother, yet his parents know that taking a path of revenge would only reopen old wounds nearly healed.

Continue: The Look Of Silence Trailer

The Act Of Killing Trailer

Anwar Congo is a former gang member who executed around 1000 alleged communists after becoming a leader of a death squad during the 1965-1966 Indonesian massacres. The killings took place after a rebellious organisation called the 30 September Movement murdered six army generals - an event that was blamed solely on the Indonesian Communist Party. He is now labelled by many as a war hero, but when he is asked to take part in a dramatization of his memories of what happened, it turns into a strange and surreal, almost hallucinogenic,  recollection. When asked to portray a victim himself, he struggles to carry on and admits his empathy for some of the victims of the genocide. The question is, is there any remorse there for Anwar's actions? Or will he and his fellow killers continue to convince themselves of their heroism?

'The Act Of Killing' is a chilling documentary directed by Joshua Oppenheimer ('The Entire History of the Louisiana Purchase') alongside Christine Cynn ('The Globalisation Tapes') and an anonymous co-director. It is a rare insight into the thoughts and feelings of a mass executioner that has earned nods from the 2012 Toronto and Telluride Film Festivals and an award from the 2013 Berlin International Film Festival. It is scheduled for a UK release on June 28th 2013.

By Chris Barsanti
Bad
The best thing that can be said for the embarrassing A Sound of Thunder is that at least it presupposes an audience whose belief in evolution is ironclad, sadly a minor triumph in these increasingly Scopes monkey trial-like times.

Adapted with sub-simian grace from the iconic Ray Bradbury story, the film puts us in the year 2055, where a Chicago firm called Time Safari takes wealthy, bored men back in time and hunt dinosaurs. The trick here is that Bradbury - prefiguring all the great time travel paradox stories and films to follow - realized one couldn't just do this without creating massive complications further down the time pipeline. So Time Safari has its hunters walk through the 65-million-year-old jungle on a pathway suspended above the ground, with the strict dictum not to touch anything, never step off the path and not to bring even the most microscopic thing back with them. And the dinosaur that they "hunt" (over and over again) has been selected for the fact that it's going to die anyway, bare seconds after the safari team shoots it. Thusly the time continuum remains unchanged and everybody's happy. 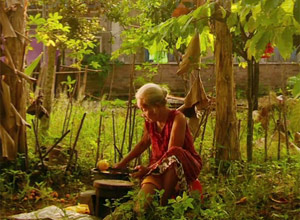 The Look Of Silence Trailer

Sometimes, you simply have to live with the past. You don't have to like it,... The Act Of Killing Trailer

Anwar Congo is a former gang member who executed around 1000 alleged communists after becoming...