Kate Beckinsale helped to honour her late father Richard Beckinsale at a star-studded ceremony in his old school in Nottinghamshire, England, on Wednesday (17.07.13). 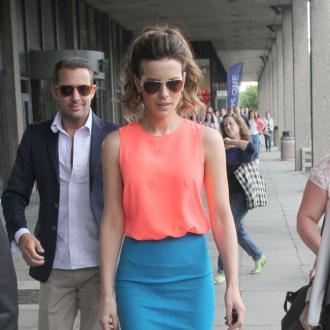 Kate Beckinsale unveiled a special plaque in memory of her late father in England on Wednesday (17.07.13).

The emotional 'Total Recall' star, 39, was spotted wiping away tears at a ceremony to honour her TV star father, Richard Beckinsale, at the College House Junior School, in Chilwell, Nottinghamshire.

She was joined at the event by her mother Judy Loe, director husband Len Wisemen, ex-boyfriend Michael Sheen and popular comedian David Walliams.

Head teacher Mark North paid tribute to Richard and praised the 'Porridge' star, who passed away when he was 31 after suffering a massive heart attack in 1979, as an inspiration, according to BBC News.

He said: ''It's a real honour for the school to be a part of this special occasion, dedicated to the memory of Richard Beckinsale.

''It was a once in a lifetime experience for us all. We are honoured to have hosted such distinguished guests.

''We place a high priority on the performing arts in school, and hope that pupils will continue to be inspired by Richard's career for many years to come.''

Richard, whose other daughter Samantha is also an actress, was best known for his roles as Lennie Godber in the BBC sitcom 'Porridge' and Alan Moore in ITV's 'Rising Damp'.

Kate, who has a 14-year-old daughter, Lily, with 'Twilight Saga' star Michael, was just six when her father died.