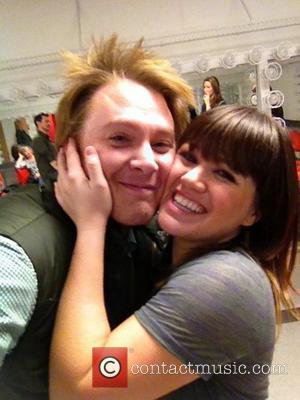 Picture: Kelly Clarkson posted this photo on Twitter.com of she and Clay Aiken hanging out USA - 02.02.12 This is a PR photo. WENN does...

It's been a long time since Kelly Clarkson had to sing for survival on American Idol but last night (February 5, 2012), she was essentially singing for the survival of her career, performing a stunning rendition of the American National Anthem - backed by the Indianapolis Children's Choir - to launch the 2012 Super Bowl. The hugely popular sporting event took place at the Lucas Oil stadium in Indianapolis, Indiana.
The match may have been won by the New York Giants but in the entertainment world, the real winner was Kelly Clarkson. With the eyes of the world on her, her pitch-perfect performance of Star Spangled Banner certainly seemed to impress fellow performers such as Pink, who posted a Twitter message reading "Kelly Clarkson KiLleD the national anthem. Show em' how it's done girl!!!!" There's a huge amount of pressure riding on the annual Super Bowl performances, which are watched now by millions across the globe, but Clarkson turned in a stellar performance. Clarkson herself took to Twitter to state the obvious: "Guess what ....I've never been more nervous in my life than singing the national anthem at the Super Bowl tonight." She also took time to thank the likes of Josh Groban, who had said "Kelly Clarkson Ruled that anthem." Clearly buoyed by the positive feedback for her performance, she sent a public message to Jason Aldean saying "Next weekend we're gonna kill it at the Grammy's woohoo!!'
The honor of the half-time performance went to Madonna, who performed an energetic medley of her classic hits, as well as her latest single, 'Give Me All Your Luvin.' For the latter, she was joined onstage by Nicki Minaj and Mia who both feature on the song. Despite stumbling and almost falling at one point, the 'Vogue' star managed to get through the complex performance without a hitch.