Actor Kelsey Grammer Fears Sunday's (15mar15) First Preview Of His New Broadway Show Finding Neverland Will Be A Disaster Because Rehearsals Have Already Included An On-set Accident And A Failed Costume Change. 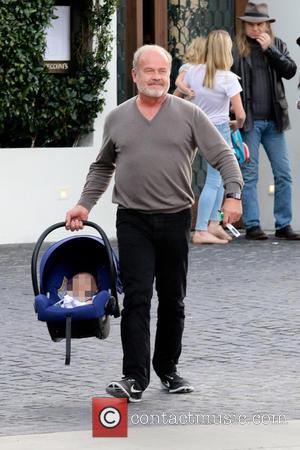 The former Frasier star portrays Charles Frohman, the producer of playwright J.M. Barrie's production of Peter Pan, and the curtain is due to go up for the first time on the musical at the Lunt-Fontanne Theatre this weekend.

However, Grammer has warned the audience at Sunday's show to be prepared for hiccups as castmembers and producers still have a number of kinks to work out.

During an interview with U.S. talk show host David Letterman on Wednesday night (11Mar15), he explained, "We were standing on the stage rehearsing (today) and I realised we hadn't done that scene for about 10 days, so I thought, 'We're probably in trouble on Sunday', 'cause I didn't remember anything I was meant to say...!

"The New York audience is great, you know, the Broadway gang, because they know accidents are bound to happen (in previews). We've had a couple - one girl got knocked out by a harpoon the other day."

He continued, "I've got one costume change at the beginning of the show that hasn't gone right yet. I'm about 30 seconds behind so I'm not sure what's gonna happen."

However, Grammer is confident that once the show officially launches on 15 April (15), theatregoers will not be disappointed.

He says, "It's a very, very complex show. Finding Neverland is gonna be a great show. A lot of people are gonna just fall in love with this and it's gonna run for 25, 30 years. I've honestly been telling people if they don't see it, they will regret it."

Grammer will star alongside Glee actor Matthew Morrison, who will portray Barrie, while Tony winner Diane Paulus will direct the production, which is being produced by movie mogul Harvey Weinstein and Breaking Bad star Bryan Cranston, among others.