Kendall Jenner has denied she is dating Harry Styles by insisting they are ''cool'' and just friends after they were spotted out for dinner last week. 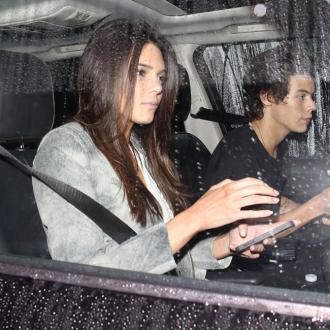 Kendall Jenner has denied she is dating Harry Styles.

The 'Keeping Up With The Kardashians' star has broken her silence on her close relationship with the 'Story Of My Life' singer by insisting they are ''cool'' and just friends after they were spotting leaving a Los Angeles restaurant following a cosy dinner date last week.

The 18-year-old beauty - who is the younger sister of Kim Kardashian - shut down rumours of a romance when she attended the American Music Awards on Sunday night (24.11.13), where Harry had also been performing with One Direction.

Kendall split from her high-school boyfriend Julian Brooks earlier this year, before hitting-out at reports she was dating 21-year-old rapper Young Jinsu last month - but she has insisted it's difficult to have male friends.

She added: ''You go out with one person, you're automatically dating them.''

Kendall's 16-year-old sister Kylie - who is also speculated to be dating Jaden Smith - was quick to defend her sibling, as she explained: ''It's very hard to have friends of the opposite sex''

The comments come after Harry - who split with Taylor Swift in January before being linked to Cara Delevingne - insisted he wasn't dating the reality star.