Daniel Carter is a cop who gets sucked into the most terrifying ordeal of his life when he picks up an injured and exhausted man from the side of the road in his squad car. He rushes him to hospital where medics are forced to sedate him as he is flooded with panic. Not long after, Carter is nearly stabbed to death when he goes out to investigate the assembly of dozens of mysterious white hooded figures sporting black triangles on their robes, all standing watching the building. It soon becomes clear that something has happened to the man now lying in a hospital bed - and not just him. Other patients and staff start to behave violently, killing the people around them. Carter has no choice but to flee with the survivors, but with the outside still surrounded, they are forced to take shelter in the basement where they find a horrific scene where only evil dwells. 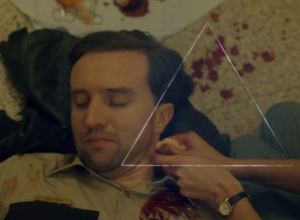 Daniel Carter is a cop who gets sucked into the most terrifying ordeal of his...