Kylie Jenner and Jaden Smith are believed to be dating after their mutual friend Lincoln Lewis let slip that the brunette beauty was ''Jaden's missus''. 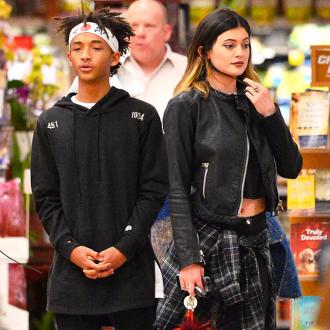 The pair, who have sparked speculation on numerous occasions that they are romancing each other, have remained tight-lipped on their relationship status, but their mutual friend Lincoln Lewis has confirmed the rumours after he referred to Kylie as ''Jaden's missus''.

However, after realising that he had let the cat out of the bag during the interview with Sydney radio station Kiis FM, the Australian actor attempted to backtrack on his comment by saying: ''We've all just been hanging out dude, so I was like I don't know. It's not a confirmation, it's just an idiot's assumption about things.''

Kylie, 16, was reportedly spotting locking lips with Jaden, 15, at her half-sister Kim Kardashian's wedding reception in Florence, Italy, on May 25, after he'd accompanied her to the romantic nuptials.

However, the 'Keeping Up With the Kardashians' star got tongues wagging on Friday (13.06.14) when she was photographed cuddling up to her friend Miles Richie, 20, in her car before the hunk leaned in for a smooch.

Meanwhile, Kylie's mother Kris Jenner, 58, recently admitted that she has a ''very close'' relationship with Jaden, whose parents are Will Smith and Jada Pinkett-Smith, and sees him as one of her own kids.

She said previously: ''He is the greatest kid in the world. I'm very close to Jaden and he's like one of my own, you know.''