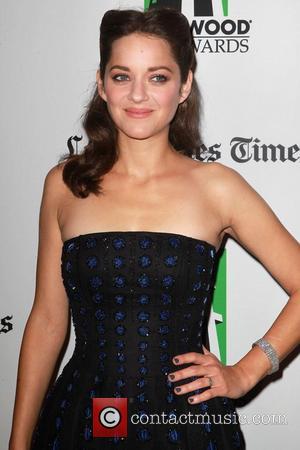 Ah, the life of the jet-setter. Marion Cotillard was spotted by the Daily Mail, landing at LAX on Thursday (November 1, 2012), after winning an award at Harper’s Bazaar’s Women of the Year Awards in London the night before. Marion picked up the gong for International Actor of the Year at the glittering, celebrity-studded ceremony.

Cotillard was looking pretty pleased with herself as she arrived in Los Angeles, dressed casually in dark trousers, a knitted sweater and blazer, all toped off with a bakers’ boy hat, hiding her hair. The Dark Knight Rises star had opted against wearing any make-up but hey, if you’re on a along haul flight and you have the face of Marion Cotillard… frankly, who needs make-up?

At the awards show, however, it was an entirely different matter, as she looked positively sparkling. Teaming up a pair of striking white shoes with a black dress, which had a touch of ‘The Black Swan’ about it, Cotillard accessorised her outfir with a sparkling diamond necklace.

Speaking to Harper’s Bazaar, Marion Cotillard revealed that she’s enamoured with British culture, saying “'I think of England as music with fashion. You mix rock ‘n’ roll with everything, from royalty to punk to the bourgeoisie. 'Music-wise, you’re the best. David Bowie, the Rolling Stones, Radiohead, the Beatles… and she’s also a fan of Absolutely Fabulous, too.”