Matt Lauer was hardly given a grilling by Jay Leno, though he briefly chatted about his rough year on television. 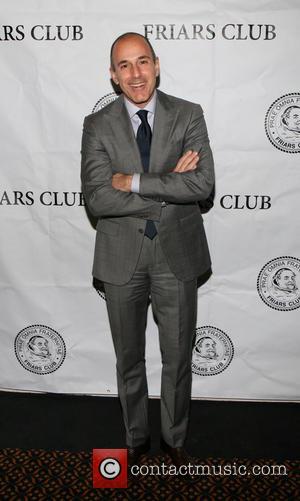 Picture: Matt Lauer - 'A Salute to the Weathercasters' with the presentation of Lifetime Achievement Award to Al Roker held at The Friars Club - New...

Matt Lauer opened up about his frankly horrendous year on television during an appearance on The Tonight Show with Jay Leno on Thursday (May 2, 2012). Many viewers perceive Lauer to be the sole reason why former Today show host Ann Curry was replaced on the show, which fell behind ABC rival Good Morning America in the ratings for the first time in years.

"It's been an interesting year - no question about it," Lauer told Leno when asked how he was doing. "I'm not a guy who complains. I love this job, I really do." Lauer - who is reportedly paid $25 million a year - was said to have been "100 per cent" behind the decision to axe Ann, according to sources who spoke with Us Weekly. In an excerpt from Brian Stelter's new book on morning television, it is suggested that the plot to get rid of Curry was titled "Operation Bambi," with one production assistant apparently overhearing Lauer say, "I can't believe I am sitting next to this woman," while on set.

Leno avoided going into detail about the Ann Curry saga, though was asked about a full page ad taken out by Kathie Lee Gifford this week, defending Lauer. "Kathie Lee did something very sweet a couple of weeks ago," he said. "She went around and she just passed around a note and had members of the staff sign it just saying, 'Things are going to be okay."