Fox jumping on a trampoline is the first glimpse at the movie we've gotten. 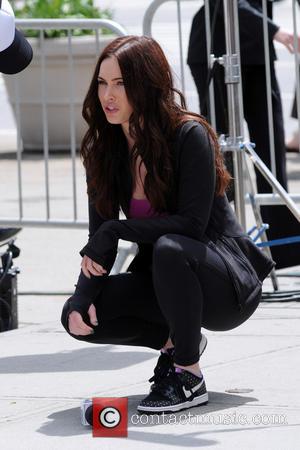 We know she probably hasn’t been on your mind too much lately, but Megan Fox’s trampoline studs made headlines yesterday. The Transformers starlet was caught filming a scene for her upcoming Michael Bay production, Teenage Mutant Ninja Turtles. As Fox was wearing tight clothing – a tank top and yoga pants, you can imagine how excited the fanboys got over the stills. We’ll give you a hint: very excited.

For those of you who haven’t been paying close attention, here’s a quick rundown of the Fox/Bay situation. The actress starred along with Shia LaBeouf in the first two transformer movies, before being booted off for a younger, hotter actress (who had, as you may have guessed, even fewer lines in the film than Fox had had). At this point though, everything is mended between Bay and Fox and she is back to provide the mandated dose of eye candy in the flick - which, judjing from the trampoline photos, courtesy of Us Weekly, she is doing a spectacular job providing.

In this new adaptation, Fox will be portraying TV reporter April O’Neil and she’ll be teaming up with actors Alan Ritchson (Raphael), Noel Fisher (Michelangelo), Jeremy Howard (Donatello), Pete Ploszek (Leonardo) and Danny Woodburn (Splinter), as well as a lot of CGI. The plot or general idea is as of yet unknown, but you can count on the fact that, in typical Michael Bay style, there will at least be lots of explosions throughout to keep you from getting bored. The actress showed off her bouncy personality.