Metric have been going since 1998 which is quite literally over a decade and throughout this time they've had the same line-up and released five albums, all of which have seen them go from strength to strength. New record, Synthetica, only continues in that vein with first single 'Youth Without Youth' peaking at number 1 in their native, Canada. 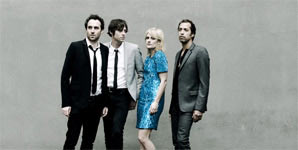 It opens with 'Artificial Nocturne' which could be Metric's audible manifesto; it's dark, as the title suggests, but it's imbued with a sense of hope as the chords change up the scale into the heart of the track. It's a perfect return for the listener to Metric after the three year gap from their last album, Fantasies.

Vocalist, Emily Haines, is, and always has been, the most alluring aspect of Metric. She has a voice like no other female in music today. She's sultry and mysterious, weighty and fun, smooth and enigmatic; basically, she has a personality that you wish you had and conveys it better than you ever could. Here, as usual, she lets the lyrics flow out of her like water from a fountain. Her ability to spin yarns with her lyrics, "We're all the time designed to fit the mould, but I won't let them make a loser of my soul", as well as do some of the most beautiful "Oohs" and "Ahhs" you'll ever hear come from a human is what makes her great. Her voice, like the band itself, doesn't appear to have much range, but what she does do she does perfectly. Never does she hit a duff note, she simply mixes her lethargic vocals (listen to her chant of "Scream becomes a yawn, I'll shut up and carry on" on 'Dreams So Real') with her unlikely soprano pitched pop vocals on a track like 'Lost Kitten.' These high pitched moments can often sound out of place but they're not; they're just not as seductive or as naÃ¯ve as the rest. In fact, on the latter track, she sounds quintessentially, sarcastically preppy.

Synthetica is an album audibly darker than much of what Metric have released before. It's less restless than a record like Live It Out and more self-expressive but, then again, it is about being bored, unexcited and discovering your true self. These themes are present not just lyrically but instrumentally in the way the music has matured over the years. Even on a track like 'The Wanderlust' which is easily one of the dullest songs here, the light scattering of synths and quick shredding of a six string gives the impression of antiquity. That's not to say Metric sound old and unoriginal now, quite the contrary. They sound well practiced and authoritative with James Shaw's synths and theremin giving an aspect of eerie, otherworldly, youthful rejuvenation to the songs.

It's actually quite astounding how structurally sound Metric's music is; they just know what works. They have steady drum beats that switch up at the exact moment you want them to; they have rhythms, riffs and melodies that work together; their use of synths is distinctly new wave and yet they've broken away from the genre. Their aforementioned single, 'Youth Without Youth', is the perfect example. It even goes so far as to synthetically alter the vocals; it's a very artificial song from a band that loves to play, it's all very new wave and yet all the tracks in the band's back catalogue are distinctly pop. Metric are a pop band - we were all thinking it and, you know what? It's absolutely fine because they're great at it. Besides, new wave has always been associated with pop; it's basically synth pop and Metric personify that perhaps more than any other mainstream band today.

This is a record which shows after 14 years together and nine years after the release of their debut album and Metric are still as good and relevant as ever. Not everything about it is great but then perfection is never as good as it seems; hell, if they were perfect you wouldn't want to hear another record with a chance of ruining that but, pitched at near perfect , you always want to carry on listening. They're one of few bands who consistently release good music. They're not the in-your-face band you want to tell everyone about, they're the band that only your nearest and dearest know you love because, while it's not a guilty pleasure, it's a quiet understanding that you heartily adore what they do. If, as Haines sings on 'Breathing Under Water', "They were right when they said we should never meet our heroes when they bow at their feet in the end it wasn't me" then never do I want to meet Emily Haines. 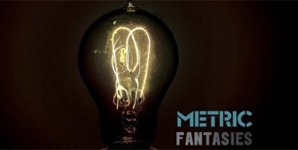