Miley Cyrus breaks down on SNL

Miley Cyrus broke down in tears while singing about her dead pets on 'Saturday Night Live'. 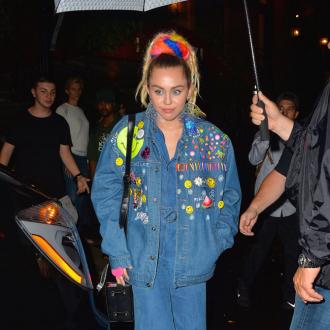 The 22-year-old star, who hosted the US comedy sketch show's season premiere, couldn't help but shed a few tears while singing 'The Twinkle Song' - an ode to some of her dead pets.

Miley performed the emotional song while playing piano and there was even a heart-shaped frame containing a picture of her dead dog Floyd perched atop the instrument.

The singer struggled to hold back her tears and completely broke down as she reached the end of the song.

Elsewhere in the eventful episode, Miley and the cast of 'SNL' cracked jokes about Lenny Kravitz's recent genital exposure, Ariana Grande's donut-licking saga and she even faked an orgasm in scenes reminiscent of 'When Harry Met Sally'.

Miley also joked about the live show's need for a seven-second delay, saying her drug use was responsible.

She quipped: ''When you smoke as much as I do, you're always on a seven-second delay.''

Last year, Miley mourned the death of her beloved husky Floyd, who was killed by a coyote in April 2014.

At the time she tweeted: ''I know I don't mean it but I wish he would've taken me with him this is unbearable. What am I gonna do without him?''