A Week in Music Featuring: Muse, Mumford & Sons, Alpines, Miguel, Of Monsters and Men, Alt-J And Much More! 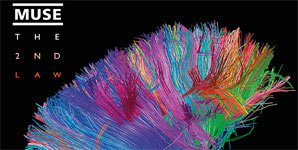 'Early Hours' is the latest EP from the Kingston duo Alpines and is described in our review as "14 minutes of uplifting joy." Catherine Pockson and Bob Matthews have created four tracks of stunningly dark electro-pop, which hints that the band must have more quality material up their sleeves and ready to unleash on the world. "There may only be four tracks, but each one is crafted into something beautiful and stands apart from the next. Exactly what you want to hear on any record. A very impressive EP, Alpines deserve a large chunk of recognition for this."

Interview of the Week: Miguel We spoke to Grammy nominated singer Miguel about his new album Kaleidoscope Dream and his struggles with remaining true to himself as he grapples with the big bad beast that is the music industry: "I think it was so much easier because that was the actual driving thought: 'just be true to yourself' on every level this time around. On the first album, when it came to image and so forth, I wasn't making all of the decisions for myself. this time around, being myself was at the very core. I executive produced the album, if I didn't produce the song, I co-produce it or I played on the song, I wrote all the songs. I creative directed the album, like the packaging I styled myself."
Despite his success, Miguel hasn't lost touch with his fans and made sure to show some love before the album release by giving away the 'Art Dealer Chic EPs' online: "This was a definite way to reconnect, let me just forget about the label, let me just make music for me and the people that love this s**t," said Miguel.

A Week in Video.... 'Mountain Sound' is the latest video from Of Monsters and Men, a band we recently interviewed at Leeds Festival. This sees the band performing live at a festival in Reykjavik, doing all the things that bands do at festivals, setting up their kit, signing autographs for eager fans, giving backstage interviews and most importantly, performing for the masses. Alt-J are a band at the forefront of many people's minds right now, as they've just been nominated for this year's all-important Mercury Music Prize. The 'Something Good' video is a sultry affair, with slow motion footage of a matador, impaled on a bull's horn, a crowd fleeing the trauma; it's somehow gory and romantic all at once.

Wild Belle have already been tipped for great things, and with 'It's Too Late' you can see why. They combine the charm of 80s pop like Bananarama, with the retro charm of old-school dub and '60s pop

Music in the News.... Legendary 60's crooner Andy Williams died last week, at the age of 84. He had been battling bladder cancer. Tributes were led by fellow singer Tony Christie, who said he was "a real pleasure to have met"

Rolling Stones' guitarist Ronnie Wood is said to be fuming after discovering that his ex-wife Jo Wood is holding an auction of his memorabilia and advertising it as a joint sale. Jo reckons she inherited the items as part of their divorce but Ronnie's not so sure.