Socialite sisters Paris and Nicky Hilton were paid $1 million to attend a party for a 16-year-old girl in Cannes, France. 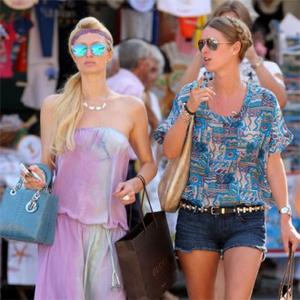 The showbiz siblings have recently been holidaying in the south of France, and a source has revealed the girl - who was celebrating her 16th birthday - was "ecstatic" to have the pair in attendance.

An insider told X17online.com: "Paris and Nicky were flown to Cannes for a sweet 16 party for a Middle Eastern princess.

"They were paid a hefty price tag of $1 million to show up for one hour. The teenage Birthday Girl was ecstatic to have Paris there."

Socialite Paris, 30, and her designer sister Nicky have been enjoying a host of parties around the Mediterranean in recent days.

She arrived on the Spanish party island of Ibiza yesterday (07.08.11), where she revealed she couldn't wait to "get the party started".

She revealed on twitter: "Just landed in Ibiza in NickyHilton! Yes!! Let's get the party started! Huge!! :D(sic)"

Hours later, she added: "Midnight in Ibiza, just now on our way to dinner. The night has just begun."