The reality TV star is angered that the pregnancy news leaked before she could announce it, but is happy to confirm her wedding with Jionni is still going ahead later this year. 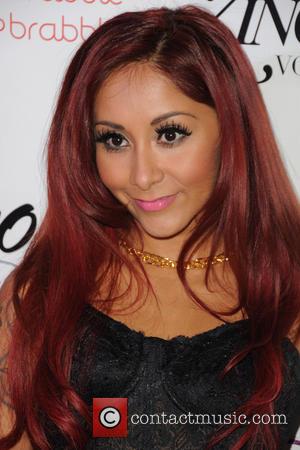 Snooki, real name Nicole Polizzi, was made famous for getting 'wasted', sleeping with multiple men and fighting other woman as a cast member of the MTV reality show 'Jersey Shore'.

But those days are long gone as the 26 year-old is preparing to welcome her second child into the world.

Snooki already shares a 19 month-old son with fiancé, Jionni LaValle, who also appeared sporadically on the reality show, and the proud mother announced on Friday (April 4th) that they will be extending their family later this year.

"Jionni and I are so excited to confirm that we are expecting our second child!" Polizzi wrote on her blog. "Now knowing that our test results are good and our baby is healthy, we can finally talk about it!"

But unfortunately the reality TV star was not happy that the news was leaked before she could confirm it herself.

"I get it, we are on a reality show and share 98% of our lives to our fans, but with this particular situation with expecting a child has to be announced from us personally," she added. "Not by some tabloid headline trying to make a quick buck."

Another downside to the announcement was the negative, and harsh, reception Snooki received from certain media outlets, and highlighted one mean spirited article in particular.

"For example, I saw an article that Complex.com posted by Nancy Stiles about my 2nd pregnancy labelling the title 'Snooki Expecting Second Child. God Help Us,' she wrote, referring to the negative press. "Really Complex? With all the trouble in this world you're asking God to help us because I'm expanding my family and happen to be an amazing mother to my children? Keep the 2012 jokes to yourself."

However, on a happier note Snooki did reveal that she does still plan on tying the knot with Jionni this year, and the second pregnancy changes nothing.

MORE: Snooki felt like a champion after spending 27 hours in labour

"We planned to have a second child before our wedding, and will indeed still be getting married in the fall of 2014," she wrote. "The wedding is still on as scheduled and it will take the apocalypse to change that."