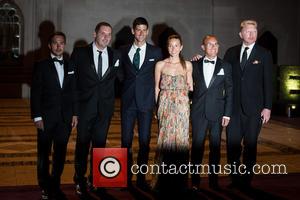 The player, who is ranked 25th in the world, was staying in the penthouse suite at the W Hotel in Miami Beach, where his loud partying prompted multiple complaints from fellow guests.

Hotel security guards confronted Tomic about the noise and asked him to turn down the music volume, but he allegedly dismissed the complaints and slammed the door in their faces.

Managers subsequently called police to have the 22 year old and his party pals evicted, but when Tomic refused to leave he was taken into custody, according to TMZ.com.

The sportsman, who exited Britain's Wimbledon tennis championships on 3 July (15) after losing to eventual champ Novak Djokovic, was booked at a nearby jail and later released on $2,000 (£1,250) bail.