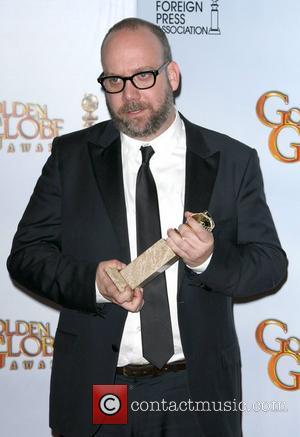 Paul Giamatti's new movie BARNEY'S VERSION is leading all nominees for the upcoming Genie Awards in Canada with 11 nods.
The film has edged out Canada's Best Foreign Language Oscar hopeful, Incendies, which has landed 10 nominations.
The two movies will compete for the Best Film prize at the independent cinema awards in March (11), along with 10 1/2, Les Amours Imaginaires and Splice.
Giamatti will compete with Jay Baruchel (The Trotsky), Robert Naylor (10 1/2), Francois Papineau (Route 132) and Timothy Olyphant (High Life) for the Best Actor award, while the Best Actress race will be run by Lubna Azabal (Incendies), Tatiana Maslany (Grown Up Movie Star), Molly Parker (Trigger), Tracey Wright (Trigger) and Rosamund Pike (Barney's Version).
The Academy of Canadian Cinema and Television will hand out the honours on 10 March (11).