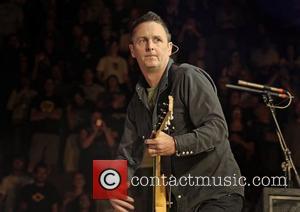 Pearl Jam closed out a triumphant Made In America Festival, and put the icing on top of a career-spanning set some two-hours long by bringing out the man who made it all happen for a stirring encore, Jay Z. Jigga's well known for his love of rock, releasing material with Linkin Park in the past and becoming firm friends with Coldplay's Chris Martin; the line-up for the weekend further reflected the hip-hop mogul's love of the genre with the grunge veterans headlining, and he applauded them by coming onto perform a meaty version of his hit 99 Problems with the band.
A passionate set by Pearl Jam saw their talisman Eddie Vedder dedicate song Unemployable to the hard-working family man who'd lost out because of job cuts. Galvanising the crowd, he said "I want to see more things made in America" to thunderous applause before launching into the song.
It was a fine set all round by the group, but they were upstaged by the return of Run Dmc, playing their first show in more than a decade since the death of their co-founding member Jam Master Jay. An emotional show by Joseph "Run" Simmons and Darryl "DMC" MCDaniels, saw Jay's sons join them on stage in memory of their father whilst Jay Z was once again in attendance, this time spectating with wife BEYONCE.