On the 25th June 1984 Prince released an album that would super-charge his popularity and elevate his status beyond imagination. Prince's sixth album, Purple Rain, would truly put Prince Rogers Nelson on the world stage with a record that not only reflected the time in which it was made but also pushed the boundaries of popular music with it's outlandish style and inspirational production. From the album opener Let's Go Crazy through to it's sublime close out track Purple Rain, Prince showcases an incredible talent through his musicianship, writing, arrangement and evocative performance. 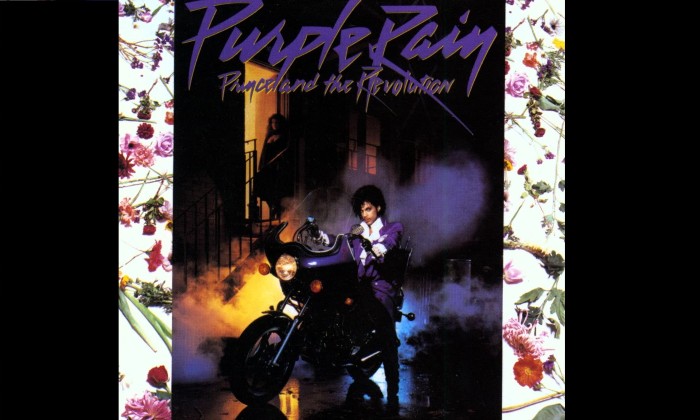 Prince was a showman like no other and Purple Rain, more than any of his previous records, brought his formidable talents and captivating artistry to a much wider audience than ever before. His last studio album, 1999, had helped to put Prince firmly in the minds of the public consciousness with tracks like Little Red Corvette, Delirious and of course the now iconic title track but it was Purple Rain that truly made Prince a household name. Whilst it was less funky than some of his previous work, the new material that Prince shared on his sixth album was far bigger, bolder and poppier. The fully loaded sound was in part due to a greater band ethos and inclusivity. Purple Rain was the first of Prince's records to include his legendary backing band The Revolution. Between them they delivered an album that would be appreciated, not only by millions of fans world-wide, but one that would also almost universally be lauded by the critics.

In many respects Purple Rain is the perfect pop album, it's succinct, of the moment, inspirational, captivating and above all hugely enjoyable. The songs are ground-breaking and pivotal, bringing together Prince's unique creative artistry crashing and screaming unashamedly into your living room. It's arresting, adrenalin pumping, heart-racing and uplifting. Once you're hooked by the beats and licks of Let's Go Crazy there's no release. Take Me with U slows the pace but offers a joyously and sumptuous soundtrack that is difficult to resist before The Beautiful Ones puts Prince's expressive vocal front and centre as he pours his heart out. Darling Nikki may have raised a few eye brows in the mid 80's but Prince was never afraid of expressing himself or his sexual appetite and whilst this song may have been more direct it was certainly by no means his most explicit.

The First of five singles to be released from the original nine track album was When Doves Cry. The glorious opening guitar solo is just one of the best intros to a pop song ever. As it breaks into the song proper, Prince holds court with a set of lyrics that just hold you captive....'Dig if you will a picture, of you and I engaged in a kiss, the sweat of your body covers me, can you my darling, can you picture this?" 'When Doves Cry' has it all, drama, melodies, harmonies, hooks and some of the most memorable moments in any pop song.

The title track is just as iconic, from the opening strummed guitar chords through to the incredibly emotional track itself, Prince builds a song that has become a true pop classic. As he drops the beat and sings, 'I never wanted to be your weekend lover' the song takes on whole new dimension and then when the chorus kicks in, well the rest is history, it's just magical.

Purple Rain is beyond compare on many levels. It brought Prince a number one album from a number one box office film and simultaneously gave rise to a number one single; a feat only previously accomplished by Elvis and The Beatles. Purple Rain went to number one in Australia, Canada, the Netherlands, the US and even in Zimbabwe! (Surprisingly Purple Rain only got to number 7 in the UK album charts)

The album is still regarded as one of the very best albums of the 80's and is frequently included in many Best Albums Of All Time lists. Purple Rain was rightly inducted into the Grammy Hall Of fame in 2010 an has also been added to the Library of Congress's National Recording Registry list of sound recordings that "are culturally, historically, or aesthetically important". Culturally this album had a massive impact, both on the pop music of the time but also on the future career of Prince. This album didn't define him, it propelled him and fuelled his fire to go on to be an even more creative, inspirational and above all influential artist in the future.