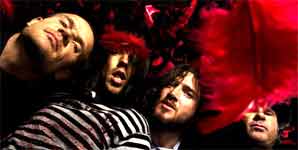 'Dani California' is the first single to released off 'Stadium Arcade' on May the 1st. The video for this track takes us through a time line of music videos. It features the bands impersonating the likes of: Motley Crue, Prince, The Beatles & many more! This is the follow up to 2002's 8-million selling album 'By The Way'. The 25 track album will also include titles include 'Snow', 'Animal Bar', 'Wet Sand','Charlie', 'Desecration Smile' and 'Hard To Concentrate' on the Rick Rubin produced album.

"This album was recorded primarily in Laurel Canyon in the Blood Sugar mansion. The recording and mixing was a year long project as it involved finishing 38 songs, 28 of which were chosen to become Stadium Arcadium. The album features Chad Smith on drums, Anthony Kiedis on lead vocals, Flea on bass, and John Frusciante on guitar and background vocals. They also all do this that and the other thing. Rick Rubin watched over the big picture and worked his brand of magic on the music, giving it balance whenever it might have fallen off the edge of the earth. The songs were written at the Alley in the Valley which is where BloodSugar was written. They were written over the course of six months. The band and the producer all had mates with whom they were in love through out this whole project. That love, heart, and warmth is in the music. You are also hearing the sound of analog tape, may it live forever." --John Frusciante,

The band's back catalogue is also expected to materialize on download services during March 2006.