Veteran Actress Rita Moreno Is Teaming Up With Emilio Estefan To Record Her First Spanish-language Album. 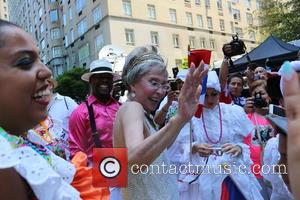 Rita Moreno, Una Vez Mas will feature 10 songs including a reworked Spanish version of Somewhere from hit stage and screen musical West Side Story, for which she earned a Best Supporting Actress Oscar in 1962.

Moreno and Estefan have been working on the project for over a year, and the album will hit stores in November (15).

She says, "This began when I met up with Emilio at an artists' event and I went to say hello because I didn't know him and I wanted to meet him.