Rita Ora Has Apologised To 5 Seconds of Summer Star Michael Clifford For Causing His Tumble Offstage At The Bbc Radio 1 Teen Awards On Sunday (08nov15). 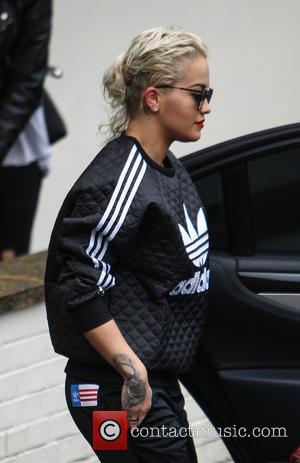 The R.I.P. singer introduced the Australian band's closing performance at the London ceremony, and was walking off the stage as the guitarist and his bandmates started their song.

Footage from their set shows Michael accidentally stepping too close to the edge of the stage and falling off into the pit. He then climbed out to continue the performance.

Michael later explained he was not looking where he was walking because he was distracted by Rita, who was wearing leather trousers and a matching crop top, telling BBC Radio 1, "I was looking at Rita Ora and I was like... 'Hey' and I fell."

Rita has since taken to Twitter.com to offer her apologies to Michael, writing, "Uuuhhh (sic) sorry about that... Feel better..." and adding a love heart emoticon. Michael is yet to reply to the message.

The musician revealed he injured his legs in the fall and would be walking with crutches in the days after the accident.

"Why do I always hurt myself," he tweeted after the show. "All good... On crutches for the next few days. Don't look at me funny pls (sic) lolz (laugh out loud)."

The tumble comes months after Michael accidentally set himself on fire during a concert at London's Wembley Arena in June (15). The pop rocker walked into the path of a flamethrower and his hair was set alight.

Michael was not badly injured in the blaze, but the band abandoned the show so he could receive treatment.