Review of Milwaukee At Last!!! Album by Rufus Wainwright 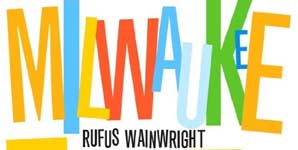 This is a live CD, meant as a companion to the DVD also going on sale in a little while. As I haven't seen the DVD, the image immediately conjured is one of a recording in a smoky cabaret club, owing to the swing band happily trumpeting away in the background, juxtaposing the piano. It fits brilliantly with Wainwright's mournful voice and adds to the atmosphere of the album, spanning 10 cuts from the show.

This is recorded nicely, crowd noise is kept to a minimum between songs and Wainwright is studio perfect, dropping not a note over the course of about an hour. Personally, I prefer a more intimate sound with a little extra crowd, ala Coheed and Cambria's excellent Neverender shows, but I am aware that the target audience for this will not be anticipating a real 'live' sound when compared with a heavier band's live albums. I'm sure that on the DVD, this doesn't matter quite so much, but when listening, it can be a barrier to feeling as if you were actually present at the concert.

That said, you can't fault the live arrangements that appear- single Rules and Regulations fourth on the bill from 2007's Release the Stars takes a new direction and greater presence when performed live. Popular cover If Love Were All by Noel Coward adds diversity to the live album and the mammoth double header Not Ready for Love/Slideshow is simply epic in scope, turning and twisting through fourteen minutes.

If you're a fan of Wainwright, buy the DVD. It's much longer and should better capture Wainwright's famous charisma, compared to the CD. As a second choice, Milwaukee At Last!!! in audio form only is a great listen.