RZA System Of A Down Wu Tang Clan

Rapper RZA And System Of A Down Bassist Shavo Odadjian Have Finally Unveiled An Album's Worth Of Collaborations They Recorded A Decade Ago. 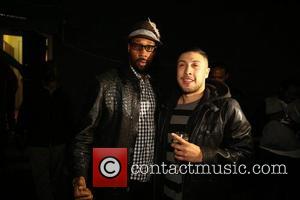 Picture: Rza - They discussed the state of our World today and how Hip-Hop needs to Returns to its roots of Impacting the World at rmc...

The Wu-Tang Clan leader and heavy rocker Odadjian first announced plans for their Achozen project in 2005, but a full release failed to come to fruition due to scheduling difficulties.

However, RZA recently revisited the tracks and decided to incorporate the tunes with a limited-edition portable speaker he has created for audio brand Boombotix, making the eight Achozen songs available to fans who purchase the Boombotix Boombot Pro.

The hip-hop veteran reveals he was determined to make the work public this year (15) to coincide with the 100th anniversary of the Armenian genocide - a topic of "struggle" he and Armenian-American Odadjian bonded over when they first met. They even tackled the subject of the killings by Ottoman Turks in the song Fabricated Lies.

"So I talked to Shavo and he tells me that this is the 100-year anniversary of the Armenian genocide. 'Then we got to do it!' It just hit me like, 'Yo, this is a great place to put the record at...'"