The 'Today' Show anchor revealed details about her weekend wedding and that she is four months pregnant with her first child, all on the same show. 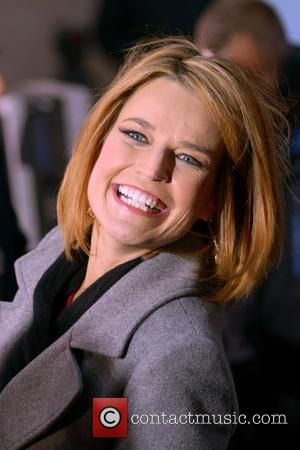 The NBC News anchor made the two huge announcements on Monday's (March 17th) addition of the 'Today' Show.

The 42-year-old told her co-anchors and viewers, over the weekend she married her fiancé Mike Feldman, and that she is also four months pregnant.

The newlyweds' wedding ceremony took place in her hometown of Tucson, Arizona.

"It was beautiful. Just everything I could have dreamed," said an ecstatic Guthrie. "We just wanted to have this private moment. It was a small wedding. We just wanted that moment with our close friends and family to basically drop a big bomb on them."

That "big bomb" was the moment when Savannah and Mike revealed the pregnancy.

"We are so excited, overjoyed and feel so blessed." Guthrie continued on the daytime show.

"We set the wedding date, I bought my dress, and then I found out," she added. "So I did a little praying. . I feel great, and actually I'm so happy to tell the world because I can't suck in this gut anymore."

The journalist also took to twitter to thank all the well-wishers for their kind and congratulatory messages.

"Reading all your wonderful msgs, feeling so thankful. THANK you for sharing our joy. I know we are so very blessed," she tweeted.

Guthrie also noted that her first child is expected to arrive in "late summer."

The groom, Mike Feldmen, tweeted, "Our hearts (and twitter feeds) are overflowing with joy. Thanks for all of the good wishes from me and @SavannahGuthrie #SavannahSurprises."

This is Guthrie's second marriage but Mike's first. Congratulations to the happy couple.